Babyface has jumped in with both feet as site Q for the Kodiak. Not only does he take the reigns in launching F3 North Atlanta’s newest AO (for now, see Roswell June 5).  He has tirelessly marketed F3 to the sadclowns of Cherokee County, speaking to neighbors, schools, etc.  His latest attempt to reach the men of Cherokee County is by bringing a reporter/photographer (thanks Jerry King) from Around Canton Magazine this morning to do a story on the F3 at The Kodiak. This guy brought all his professional cameras and lighting equipment. Not to be out done, Hombre brought a journalist from Japan. That’s right, the Kodiak had a journalist from Japan post and not a lot of AO’s can claim that one. With two reporters and the chance to have 15 minutes of fame, 18 Pax showed up ready to walk the cat-walk in the gloom and dance for the camera under the beautiful crescent moon. YHC was no exception. However, with all the AO challenge fever and VQs at the Kodiak, YHC was not sure if he was the Q for today until YHC got the following from Babyface last night:

“Do you mind taking back the Q on Monday? I think we are out of VQ’s, and I’d like this guy coming out to see one of our stronger guys lead. Let me know if you can’t do it and I will put somehting together.”

Ignoring the complement of one of the stronger guys, (after all you saw Banjo, Cricket, Hombre, Bloodhound, and Babyface this morning) my first thought was yes, because that is F3 does. Whether you know it or not, F3 seeps into your pores and reinvigorates the leadership genes found in all men. This genic makeup may be hard to see but its there. It is given to every man by their Creator to be leaders in their homes, churches, and communities by serving. And it all starts with answering yes. The more you post in the gloom, the quicker your are to answer yes. (Just ask Do-Si-Do about leading the prayer at church). YHC was also excited to take the Q because I missed most of last week due to a head cold and have not Q’d this month thanks to all those stepping up to lead their VQs (remember what I said about F3 seeping into your genic code). And finally, I’ll admit – I like the camera and the camera likes me. Just look how good I looked leading the Captain Thor.

Knowing we were going to be photographed, YHC thought about some good old fashioned beat downs that really show what F3 is all about. The general game plan was formed but I always leave room for an audible because I still likes to look for inspiration to strike when it comes to the beat down. So this morning as I pulled into the crescent moonlit parking lot what do I see, but several Rubican faithful who journeyed to the Kodiak for the photo shoot. Inspiration immediately struck. Time to show the Rubican brothers familiar routines on the Kodiak playground.

Mosey to the front of the parking lot for the following all IC:

On to the Thang:

At the Rubicon, there is a wonderful route for the merkin mile around the block of a neighborhood with speedbumbs and intersections. At the Kodiak we have our own version with light poles. Line up at a light pole by the enterance to the stadium. Run the bus route behind the school stopping at each light pole alternating between 10 merkins and 10 squats. Total of about 11 lightpoles.

Next it is time to show the Rubicon brothers our hill for some 11s. At the bottom of the hill 1 plank jack and at the top 10 star jumps, then 2 plank jacks and 9 star jumps until you reach 1 star jump and 10 plank jacks. Watch out Nacho, the ground is more steep than at the Rubicon.

At this point, YHC called a Kodiak 10 count which lead to a surprisingly slow count so YHC quickly picked up the pace because the Kodiak counts fast. It was at this time that Babyface pointed out to me that I called a “Rubicon 10 count, not Kodiak”. All this work must have taken me back to Q’ing at the Rubicon because that was not the last time I would do that this morning. It was a almost 2 years ago when I first posted at the Rubicon. Time flies when your having fun.

At this time, YHC called an audible. Another familiar AO for YHC is Big Creek. So, I decided to throw in some Big Creek flare. Borrowing from Swiper a couple weeks back, I called out 40s with donkey kicks and jump ups against the school wall. Start out with 30 donkey kicks and then 10 jump ups, 25 donkey kicks and 15 jump ups and so on until you get to 10 donkey kicks and 30 jump ups. Air Chair until the six is done.  The Pax finished up with a little time to spare. Seeing Miller Time and Nacho standing next to a nice big wall, what else but BTTW!  This is something that Nacho dominates and to no one’s surprise he did again. Bloodhound (Respect) represented for the Kodiak locals, but could not out last Miller time and Nacho. The other benefit of BTTW and Donkey Kicks, there is no way the photographer was going to miss those poses.

Sprint back to the flag just in time for Mary.

Continued Prayers for growth of F3 to reach more men.

Oh yeah I almost forgot pictures. Does it look like DC2 and Cricket are the before and after photos. One straining hard while the other is feeling relief. (from what I don’t know you decide) 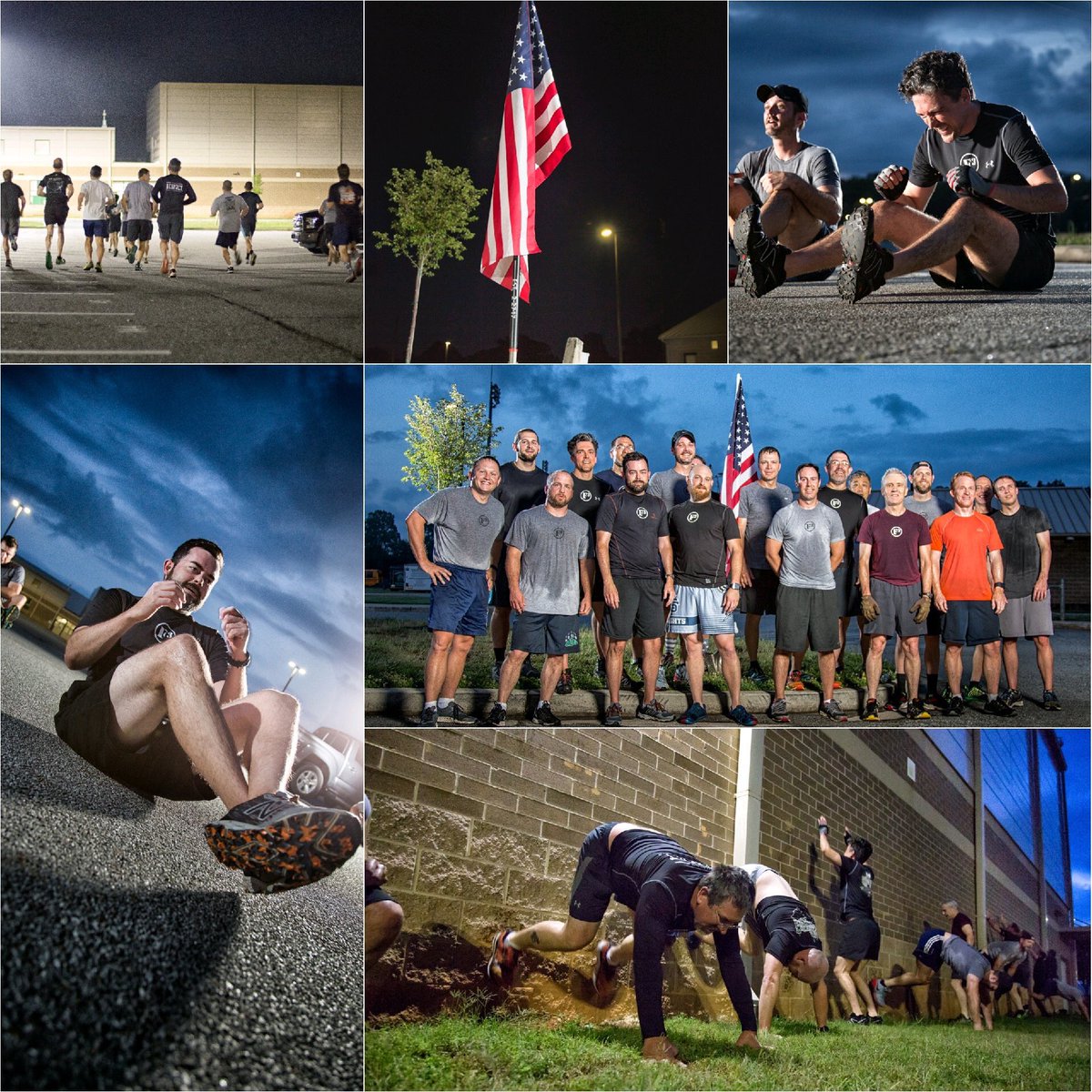